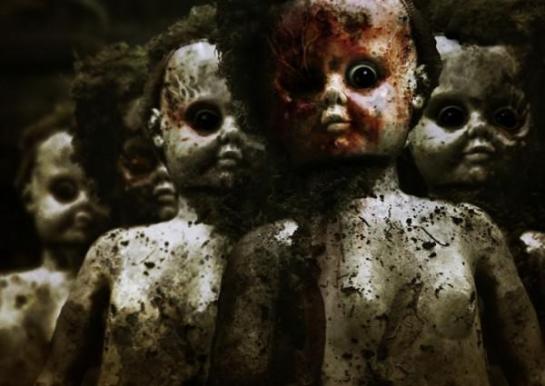 Imagine traveling in a boat and then slowly approaching an island where the landscape is littered with mutilated dolls, decapitated doll heads, and doll limbs, hanging from trees like Christmas ornaments or dangling from a dead man’s noose.  Would you be brave enough to explore and stay overnight on the Island of the Dolls? 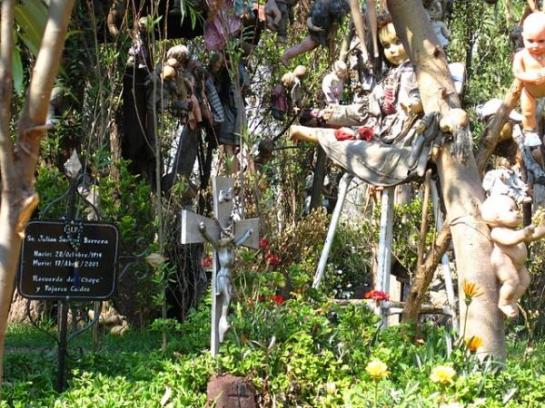 La Isla De Las Muñecas is located on what was once Lake Xochimilco, south of Mexico City. Before the Spanish colonization the area was part of the Aztec Empire.  The Aztecs created artificial islands known as chinampas that provided a variety of crops that became a primary source of food for the people of the Empire.  These man-made islands were connected through a labyrinth of canals that established a network with other nearby lakes.

The legend of The Island of the Dolls starts in the 1950’s.  A man, either by the name of Don Julian Santana or Julian Santana Barrera, took residence and became the caretaker of the island.  One day while Julian was walking he stumbled upon the body of a dead girl on the shore of his island.  One source states that a group of girls were playing near a canal and one of the girls ended up drowning and washed up on Julian’s island.  Some sources claim that Julian also found an abandoned doll next to the girl and out of respect he hanged the doll on a limb of a nearby tree to keep the spirit of the girl at peace.  From time to time Julian would find dolls floating in the canals nearby the island.  He would hang them from trees or tie them to trunks or posts.  It is even stated that he would venture off his island and look for discarded dolls through other people’s garbage. 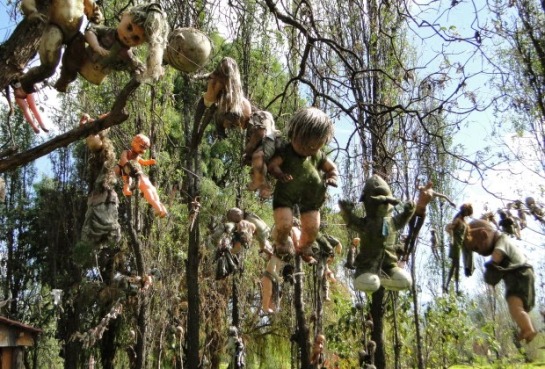 My sources vary when it comes to the reasoning for Julian’s obsession of collecting abandoned or lost dolls/doll parts and hanging them to trees.  One source claims that after discovering the girl’s body, the spirit of the girl was tormenting him and he was protecting himself from the wrath of the spirit by giving her dolls to keep the vengeful spirit happy.  His family stated that the ghost of the girl was just a figment of his imagination.  Another source stated that the girl reminded him of his daughter whom he abandoned when he decided to become a hermit and was collecting dolls for the spirit of the girl out of kindness.  However, all the variations have a common and mysterious ending.  In 2001, the dead body of Julian was found on the same exact spot where the girl was found in the 1950’s.

The family of Julian Santana have made the La Isla De Las Muñecas a tourist site.  Tours of the Island are given during the daytime.  However,  locals claim that at night the island becomes alive.  The dolls will move their remaining limbs or heads.  It has been reported that the dolls will whisper to each other and sometimes child laughter will echo through the eerie landscape of the Island of the Dolls. 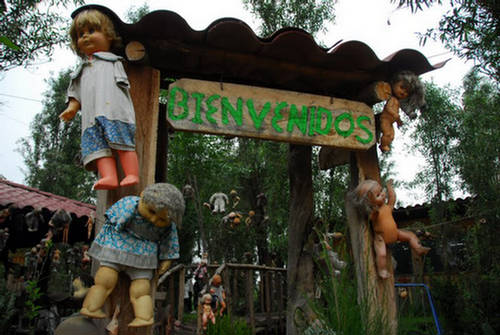 The Island of the Dolls in Mexico | Oddity Central – Collecting Oddities. (2009). Retrieved August 21, 2016, from http://www.odditycentral.com/pics/mexicos-island-of-the-dolls-is-beyond-creepy.html