connoisseurs say the meat tastes like pork and others say veal.

While many say it is morally wrong and it’s against the law.

Others treat it as a another meal.

The eating of one’s own species is very common and acceptable amongst many other organisms in nature.  Humans however, are still hung up on the idea of eating your fellow human as morally wrong and it is considered a cultural taboo in many societies.  Regardless of it being illegal or immoral, people do resort to cannibalism out of survival or for ritual practices. Longpig; by the way, is a Polynesian term from the Māori, the indigenous people of New Zealand, describing what humans would look like when cooked.  The word has become slang for cooked human flesh which is featured on many cannibal-fetish sites on the dark web.

The weak is meat, the strong do eat 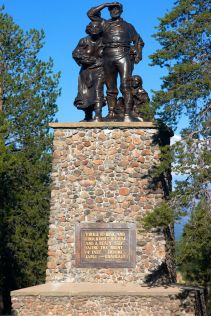 May 1846, a group of families; the Donners and Reeds, along with employees, set off on a wagon train bound from Independence, Missouri to California.  With many mishaps and a few attacks by the local indigenous tribes, these pioneers thought the worst of their troubles were over, until they became trapped in the Sierra Nevadas due to a series of early winter storms.  Due to the severity of the weather, the first rescue party arrived in February 1847. Of the beginning 87 member party only 48 survived and made it to California. Out of survival instincts, some of the remaining of the party stayed alive by resorting to cannibalism.

Raft of the Medusa

A painting by Théodore Géricault depicts an event that occurred early in the summer of 1816.  The frigate Medusa was taking civilians and French officials to claim control of Senegal after the fall of Napoleon.  Due to negligence of the Captain the ship grounded. The lifeboats couldn’t accommodate the 400 passengers on board. A large crude raft was created for the less fortunate people and was towed by the lifeboats.  With no food or water rations onboard the raft, people were getting hungry and dehydrated. Tensions grew between the passengers on the lifeboats and on the raft that lead to the people onboard the lifeboats cutting the tow line of the raft.  The abandoned passengers on the raft had to resort to cannibalism to survive. A rescue party arrived 13 days later on July 17. Only 15 castaways were left on the raft, five died shortly after the rescue. 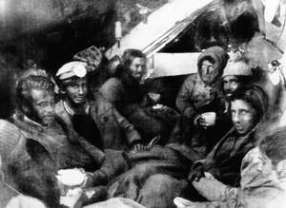 On October 12th, 1972, chartered flight 571 was en route from Montevideo, Uruguay to Santiago, Chile.  There were 3 crew members and 45 passengers on board. A Uruguayan rugby team, their family members, and supporters were on their way to a match in Chile.  While crossing the Andes, the inexperienced co-pilot made an error and the plane struck the mountain. Of the 45 passenger it was reported that 28 survived the initial crash and all of the crew died.  After the 10th day of the crash, the survivors heard a broadcast over a transistor radio that the search for them was called off. With no results of the search, it was presumed that nobody survived the crash.  Rather than facing starvation the survivors resorted to eating the dead. Three of the survivors, without any gear or experience, decided to climb a glacier blocking their path and hiked for 10 days. They eventually came in contact with a Chilean arriero (muleteer) and after over two months of being stranded; on December 23rd, the 16 remaining survivors on the Andes were rescued.

The practice of ritual cannibalism has been apart of human behavior from around the world long before recorded history and is still practiced today.  Anthropologists found human bones that showed signs of de-fleshing by other humans in cave dwellings of Homo antecessor; a archaic human species of the Lower Paleolithic that existed between  1.2 million and 0.8 million years ago in Western Europe. Human remains found in Gough’s Cave in England dating roughly 15,000 B.C. showed evidence of cannibalism. It appeared that many of the skulls were used as drinking vessels, indicating that cannibalism was a sacred practice in this location. 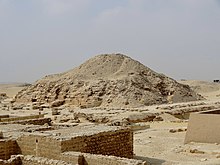 Ritual texts were found while excavating tombs in Egypt.  Amongst these Egyptian texts, the Cannibal Hymn was found in the tomb of Pharaoh Unas.

The Pharaoh is he

Who lives on the being of every god,

Who eats their entrails…

Pharaoh is he who eats men

And lives on gods

During the first century, the Greek writer Diodorus Siculus recorded an ancient story in which Osiris forbade Egyptian people to eat one another.

A sect of Hindu ascetics in India, believe that all things in the universe are equally sacred including human remains.  The Aghori believe that holding, caressing, and eating the human dead will help them transcend all dichotomies and attain nirvana by becoming one with ultimate reality.  This practice is considered a taboo amongst followers of mainstream Hinduism.

The people of the Korowai tribe, mainly in the western area of Papua New Guinea, practice the act of cannibalism out of revenge.  It is believed that when a family member is falling ill and or dies it was from the hands of a Khakhua (witch). When someone is accused of being a witch, the tribe would kill them and eat their remains to avenge their loved ones.

To prevent postpartum depression (PPD) and other perceived health benefits, some women consume the placenta after giving birth.  The first documented accounts of placentophagy were in North America in the 1970’s. Due to health advocates and the media, the ritual has seen a huge rise in popularity.  Despite the claims of the health benefits that still haven’t been confirmed, there are health risks of partaking in this ritual. The one function of the placenta is to protect the fetus from harmful substances.  Elements of selenium, cadmium, mercury, lead, as well as bacteria have been identified in the post-term placental tissue.

What are the Pros and Cons of Cannibalism?

If there is no food and it is out of survival, that would be a pro.  Chowing down on your former travel companion or neighbor will give you plenty of calories that will buy you a few more days.  Consuming cooked human flesh is no more hazardous to your health than eating the cooked flesh of other animals. 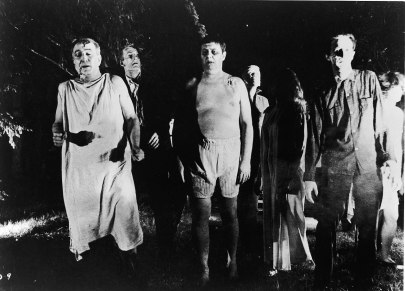 Zombies from George A. Romero’s Night of the Living Dead

Despite what the zombies say, don’t eat the brain!  Eating the brain will more than likely cause Prion disease, which is similar to Mad Cow disease and you will die from that.  Cooking your meat is very important. Not only will you get parasites and e coli, you will also get blood borne pathogens from your meal as well.  If for whatever reason you have to resort to cannibalism make sure you eat your vegetables. Like eating any other meat, if you don’t eat your side salad, digesting your fellow human will be very complicated and will lead to constipation.

After developing your reputation for being a cannibal you might be arrested, exceptions might be made if it was for survival reasons and the person was already dead.  Seek legal counsel on that one. Whether it is legal or not, you will be looked at, in a very judgemental way, probably for the rest of your life.

From the words of a philosopher, writer, and composer Jean-Jacques Rousseau : “When the people shall have nothing more to eat, they will eat the rich”.  To build off of that, if the filthy rich are going to act like greedy pigs then logically they must taste like pork.  Hmmm… bacon, I like bacon. How about you? 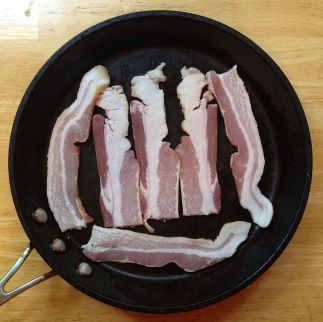 Just plain uncooked bacon, or is it?

The Legend of Sawney Beane

The Chilling Case of “Fat Longpig,” the Cannibal With a Child Dungeon

Akpan, N. (2017, April 06). If you had to eat a human, which body part should you pick first? Retrieved May 17, 2019, from https://www.pbs.org/newshour/science/served-archaeologist-considers-nutritional-value-humans

Peregrine, A. (2016, July 12). Raft of the Medusa: A grisly tale of incompetence and cannibalism. Retrieved May 17, 2019, from https://www.telegraph.co.uk/travel/destinations/europe/france/articles/raft-of-the-medusa-louvre-explained/

Coffey, J. R. (2017, November 22). Ritual Cannibalism: Past and Present. Retrieved May 17, 2019, from https://spirituality.knoji.com/ritual-cannibalism-past-and-present/

Thomas, B. (2017, April 25). Eating People Is Wrong-But It’s Also Widespread and Sacred. Retrieved May 17, 2019, from https://www.sapiens.org/body/cannibalism-ritualized-sacred/

Should I Eat My Placenta? Placentophagy and Placenta Pills. (n.d.). Retrieved May 17, 2019, from https://www.webmd.com/baby/should-i-eat-my-placenta#1