The legend of Kuchisake-Onna, a.k.a. The Slit-Mouth Woman, is a Japanese tale about the consequences of vanity and infidelity that can be dated back to the Heian Era (794-1185).  Many variations of the tale have been adapted to fit modern times, but the underlying life lessons still remain.

A very beautiful wife of a Samurai was obsessed with pulling males complimentary attention to her radiant glow of her promiscuous presence that reached a point where suspicion of infidelity started to creep into the thoughts of her husband.  Eventually the Samurai couldn’t bare the shame and  humiliation of his wife having an affair and out of rage the husband started to beat his wife and took a knife to her mouth that gave her a permanent smile from ear to ear while yelling, “who will think you’re beautiful now?”  The woman died shortly after her domestic assault and then arose as the vengeful spirit known as Kuchisake Onna.

According to the earliest version of this story that I have found, the first appearance of Kuchisake Onna was described to be wearing a Kimono and would hide her face with one of the large sleeves while haunting the streets looking for her next victim.  She would approach lone male travelers while hiding her hideous deformity with her sleeve and ask them, “Do you think I’m pretty?”  If the unsuspecting prey says yes, she will reveal her face and and ask “Do you think I’m pretty now?”.  If the victim lies and says “yes” Kuchisake Onna will give the liar a permanent smile just like hers or If he says no she will slit his throat.

A more modern version of the tale states that Kuchisake Onna was a victim of a botched plastic surgery operation and haunts the streets wearing a trenchcoat and a surgical mask to cover her mouth.  Instead of using a knife as a weapon, she would use a pair of dull rusty scissors to bring a smile to her victims. 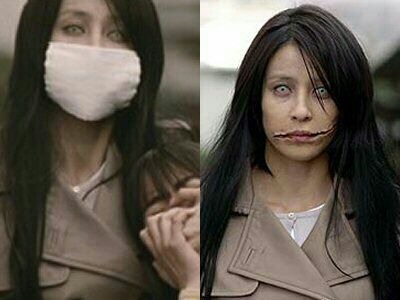 The surgical mask adaptation is the scariest version, in my opinion, due the fact that it is very common to see people commuting around the bigger cities of Japan.  Due to huge populations in cities such as Tokyo, Yokohama, Osaka, etc.  the fear of spreading germs is a norm in the culture of the populace and surgical masks have become the standard accessory that people wear while commuting in these cities.

In 1979, the legend of Kuchisake Onna blew up into mass hysteria among the children of Japan.  A woman with a Glasgow Grin was witnessed chasing children around.  The news spread rapidly like a forest fire through the rest of Japan, South Korea, and even China.  Parents, teachers, and local law enforcement of Japan got swept up into the scare by closing schools earlier in the day to allow teachers to escort the children home before it got dark.   Parks, once filled with children playing, became ghost towns.  Police increased their patrols in the neighborhoods.

Survival guide to avoid or escape the Slit-Mouthed Woman

It was a common belief that Kuchisake Onna comes from shadows, so children would avoid streets that had shadows present in the area.  Many other tactics were developed to avoid or to ward her off.  When she asks if she is pretty, answering her question with the question, “do you think you’re pretty?” or reply “So-So” is believed to confuse her and buy you sometime to escape your deadly date with this vengeful spirit.  The smell of Pomade (a certain type of hair gel) offends her and will prevent her from coming near you.  It is believed, according to the modern plastic surgery version, that the surgeon was wearing Pomade while performing his operation on the soon-to-be Kuchisake Onna and the smell of it caused her to move her head which led to her deformity and death.