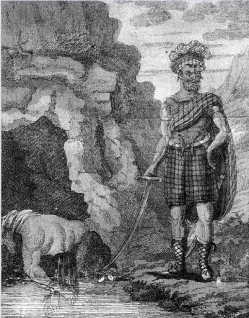 The legend of Sawney Beane and his clan of cannibals is a story that has gone through over 600 years of the telephone game. The clan of 38-48 were responsible for killing and eating more than a thousand people in a span of 25 years. The earliest printed story (The Newgate Calendar which was republished as Chapbooks in 1775) stated that the clan consisted of Beane, his wife, eight sons, six daughters, eight grandsons, and fourteen granddaughters; which to my calculations comes out to 38. Most of the variations stated the clan consisted of 48, but there are also many other conflicting or added embellishments to this story. The legend occurred either in the 15th or 16th century Scotland. Alexander Sawney Beane ran away from his ditch-digger father with a female companion. Some variations of the story claim that his girlfriend was a witch.

The couple made a home in a cave off of the coast near Girvan, Scotland. The high tides kept the entrance of the cave and the couple’s brood of cannibals concealed for 25 years. 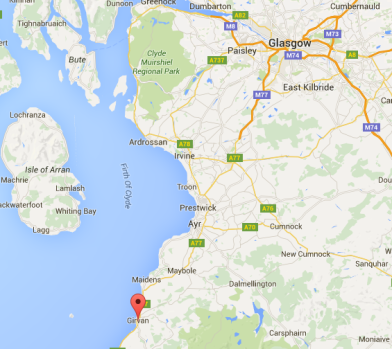 The growing clan from incest would attack travelers outside of villages and towns. They would hack their victims up into pieces and carry all evidence back to their cave. One common element from the variations of the story is how the authorities apprehended the family. The Beane clan attacked a couple leaving a fair. The man managed to escape the fate of his wife’s demise and alerted the authorities of the crime. The story gets tangled with variations of what happened next.

One version states that the head of the family along with the children and grandchildren were apprehended. They were seen as subhuman and unfit to stand trial. The adult men were tortured and slowly executed in front of the women. Then the women were burned at the stake and the children were quickly put to death. Another variation claimed that dynamite was placed at the entrance of their cave sealing in the clan causing them to face the dreaded fate of suffocation. 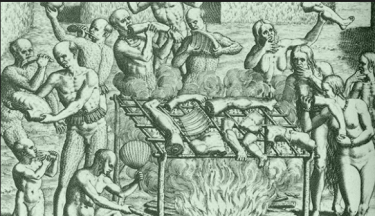 The Newgate Calender was a publication that originated from the Newgate Prison in London that told the tales of notorious criminals. Scottish historian Dr. Louise Yeoman stated that the name Sawney is a derogatory name used by the English towards the Scottish. Yeoman also suspects that the English writer created the story to dehumanize the Scots by portraying them as barbaric savages.

Many people have searched for legal documents trying to authenticate this legend. No records have been found to validate any facts. Despite that the story took place either a hundred or two hundred years before it was documented and that the possibility of the story was made up to paint the image of the Scots as savages, the story has not only transcended time, but it has sparked an interest across the globe and even inspired the imaginations of directors such as Wes Craven and his film “The Hills Have Eyes”. In fact, the imagery of psychotic rednecks terrorizing travelers has developed it’s own Horror Genre. Movies such as “Wrong Turn”, “The Devil’s Rejects”, “Texas Chainsaw Massacre”, have created the fear of taking the backroads or “lets take a short cut” a legitimate fear

Scottish myths, folklore and legends. (n.d.). Retrieved May 10, 2016, from http://www.scotland.org/features/scottish-myths-folklore-and-legends/

2 thoughts on “The Legend of Sawney Beane”