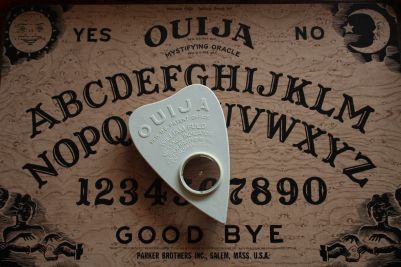 The belief and/or desire to communicate with ghosts of loved ones, historical, famous, or infamous, is a common human behavior and has always been a part of human culture.  Examples of communing with the dead can be found in the Bible, mythology, classic literature, and on the shelves of your nearby children’s toy store.  Does the Ouija Board really work or is it just a game for entertainment purposes only? 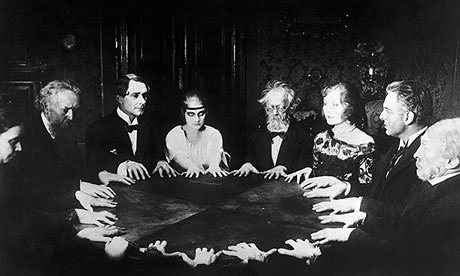 During the year of 1848, the obsession of spiritualism, already popular in Europe, spread like a wildfire in the U.S. when Kate and Margaret Fox; two sisters who lived in Hydesville, NY, became instant celebrities by claiming they contacted the spirit of a dead peddler.  The word “medium” is used as a label that identifies the talented or “gifted” person who has the ability of communicating with the dead by using various methods such as table turning (tilting or taping).  The medium along with the attendees would sit around a table and place their fingers lightly on the edge of the table top.  The medium would ask questions and then call out letters or numbers and if the table taps the floor on the letter or number the answer is presumed to be the spirit communicating back.    Another method was developed by placing a pencil sticking through the center of a small basket and the spirit would write out the answer of the questions  asked by the medium.  Later this tool developed into what is now known as the planchette, French for small plank.

Mary Todd Lincoln conducted a séance in the White House after their 11 year old son died from illness in 1862.

Other methods and tools were also used and developed to commune with the spirits but failed in the market.  The planchette tool became the most popular method of communing with the other side, due to the cost of manufacturing, this device was cheaper than its competitors such as the various types of dial plate instruments which were sometimes referred to as psychographs.

In 1886 certain variations of talking boards where becoming the latest craze in the spiritual culture.  Business partners Charles Kennard, Elijah Bond, and a few other investors created their first version of their talking board.  They managed to convince a patent worker that it worked and the first patent talking board gave credit to Kennard and Bond in 1890.  The Ouija board got its name supposedly from a séance that took place with Kennard, Bond, and Helen Peters, Bond’s sister-in-law, who had a reputation of being a strong medium.  When Miss Peters asked the board “what would you like to be named?”  The board responded by spelling out Ouija.  Miss Peters asked, “What is the meaning of the word Ouija?”  The board answered back, “Good Luck”.

Starting as a varnisher for the Kennard Novelty Company, Fuld managed to climb the company’s ladder and became a major stockholder and eventually ended up running the company.  Fuld never claimed and is not the creator of the Ouija board, but somehow the New York Times  reported  this misinformation by declaring him the inventor.  In 1927, Fuld died from falling off the roof of his new factory.  Ironically, supposedly the Ouija board told Fuld to build the factory in the first place.

Does the board work?

If you have ever used an Ouija board at a party there are always those who will try to get a scare or a quick laugh, but it is also common when people are using the board to claim that they  are not the ones moving the planchette and accuse the other person and of course the other person denies it and says the same thing.  The ideomotor effect is the culprit behind this phenomenon.  Ideomotor actions are unconscious movements that occur when we focus on not trying to move.  The movement of the planchette on the board can occur naturally for the same reason dowsing is believed to be a good way to find water.

Is the Ouija Board evil?

Spiritualism was a very popular trend during the Civil War era.  During and after wars it is very common for people to try to contact lost loved ones.  In 1967, a year after Parker Brothers bought the rights from Fuld’s company, the Ouija board sold 2 million boards which outsold Monopoly that year.  The year 1967 was also the same year where more American troops were sent into Vietnam and also the year of  “Summer of Love” in San Francisco.  The evil reputation of the Ouija board didn’t really start developing until the movie The Exorcist was released in American theaters in 1973.  Then more horror movies used the Ouija board and helped create the evil reputation of the Ouija board that is now known today.

Museum of Talking Boards: History of the Talking Board. (n.d.). Retrieved November 24, 2016, from http://www.museumoftalkingboards.com/history.html

Museum of Talking Boards – Board Gallery Page One. (n.d.). Retrieved November 24, 2016, from http://www.museumoftalkingboards.com/gal1.html

McRobbie, L. R. (2013, October 27). The Strange and Mysterious History of the Ouija Board. Retrieved November 24, 2016, from http://www.smithsonianmag.com/history/the-strange-and-mysterious-history-of-the-ouija-board-5860627/