Key West, a U.S. island city, located at the southernmost point of Florida, roughly 90 miles north of Cuba is known for its beautiful scenery, its coral reefs, laid back nightlife, a past residence to two literary giants Earnest Hemingway and Tennessee Williams, and a current home for a malevolent little doll that goes by the name of Robert.  On this weird and odd little journey we’re going to expose this urban legend that revolves around a doll that is known for being mischievous and that is causing people who visit him to write apologetic letters to avoid any sudden “accidental” deaths.

The legend behind Robert The Doll

Robert Eugene Otto was given a doll as a present when he was a small boy.  Robert, called Gene by his family and friends, quickly became fond of the doll and named the doll Robert after himself.  Gene was seen on many occasions whispering secrets into Robert’s ear and they were inseparable.

On one evening, Gene was supposedly tucked in bed slipping off into dreamland.  Gene’s parents were about to call it a night themselves and while getting into bed they heard loud crashing sounds coming from Gene’s room.  As they quickly got up and rushed to investigate the racket coming from their little boy’s room they started hearing cries for help from their pleading child in distress.  The parents quickly tried to get through the door to his room but the door was locked from the inside and would not budge, no matter how much force was being applied. And then, all of a sudden the door just opened on it’s own.  Gene’s room was redecorated with broken pieces of furniture scattered all over the room. Gene was sitting on his bed while hugging his knees close to his chest crying out of terror. His parents asked what happened. While Gene was sobbing he pointed to the doll and said “Robert did it”.  His parents looked at Robert sitting at the foot of the bed with an innocent expression on its face while being accused of a crime that it couldn’t have possibly committed. While dismissing the claim from their child as an overactive imagination, they helped Gene clean up the mess and tucked him back in bed.

The parents eventually started getting worried when the doll seemed to have had some type of hold over Gene.  Gene’s parents would sometimes hear their son talking to Robert in his bedroom and sometimes a deep strange voice would answer back.  The parents would check in on Gene to see who was in the room with their child and it always was the same, Gene would be sitting in his room alone with Robert and Gene would look at his worried parents in a nonchalant manner.

Similar events plagued the Otto Family for many years to come.  Gene and Robert’s bond lasted through the years into Gene’s adulthood.  After Gene’s parents passed away, Gene and his wife Anne moved back into his child home were Gene was reunited with his doll Robert.  Gene decided that Robert needed a room of his own and placed his doll in the upstairs room on a rocking chair near the window overlooking the street.  Anne kept getting weird feelings about Robert and tried to convince Gene to have Robert put in the attic. Gene eventually conceded and locked his childhood buddy in the attic.

Soon after, guests would visit the house and reported hearing footsteps of someone pacing  back and forth in the attic. Some people reported hearing devilish giggling sounds. Children walking by the house on their way to school would see Robert at the upstairs room window mocking them as they went by.  The neighborhood kids informed Gene about these accounts numerous times and every time Gene went to the upstairs bedroom he would find Robert sitting in the rocking chair looking out the window. Robert would be sent back to the attic every time this happened to avoid any arguments with his wife.  No matter how many times Robert was placed back into the attic he would always return sitting on the rocking chair in the upstairs bedroom looking out the window.

After Eugene Otto’s death in 1974, Myrtle Reuter bought the house along with the estate and became the  caretaker of Robert. Rueter often found Robert in different places in the house from where she had left him.  Rueter’s guest also witnessed the doll’s ability to appear and reappear and the expression on Robert’s face had a tendency to change like it was completely aware of what was going on with conversations.  If Robert was disrespected or if anyone discussed Eugene in a negative way his face would show a disdainful expression. Supposedly, people who made this mistake of disrespect would shortly be victims of “accidental” deaths, divorces, or illnesses.  In 1994, Myrtle donated Robert to the Fort East Martello Museum in Key West, Fl, where he still sits today.

The origins of Robert the Doll

After reading several blogs and websites, shuffling through all of the tourists trade sales pitches, opinions of antique toy collectors, and looking at lot of creepy pictures of dolls; I have not only found two origin stories but possibly developed a bad case of pediophobia.

The Otto family had a bad reputation for mistreating their servants and while walking out of the Otto home for the last time a Bahamian servant girl gave little Robert Eugene Otto a going away gift.  Eugene quickly became attached to his new companion not knowing that the doll was cursed with voodoo black magic that was destined to wreak havoc and terror on his family for decades to come.

The other origin story…

Many of my references are claiming that the doll was manufactured by the Steiff company and was purchased as a birthday gift by Eugene’s grandfather while visiting Germany.  It’s not really clear when the doll was made or how old Eugene was when he received his present. One reference was stating that the doll was bought in 1904. Another reference was stating that Eugene received his doll when was 8 years old.  What is factual is that Robert Eugene Otto was born in 1900. 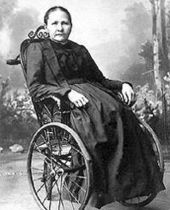 A brief history of the Steiff company

Margarette Steiff started off as a seamstress and had her own clothing business which successfully sold clothes and household articles.  After seeing a sewing pattern from a magazine, Margarette made a stuffed elephant and used it as a pin cushion. Shortly after with the aid of family the first stuffed elephant shortly became an accidental success which led to the creation of the Steiff company in 1880.  After Steiff’s success of selling stuffed animals imitations were entering in the market. In 1904, the Steiff company started to add a button with a tag on the left ear of all of their products to help customers distinguish the difference between an authentic Steiff doll and an imposter. 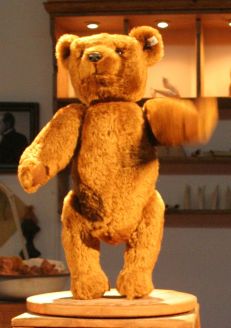 A replica of a Steiff model, The first Steiff Bear

The Steiff company started making felt dolls in the early 1900’s through the 1930’s.  These dolls were made to reflect occupations and culture (soldiers, students, butchers, etc.) rather than just serving as playful toys for children.  Most of these dolls appeared in the 22 to 50 cm size range. Robert the Doll is 100 cm in size which would be unusual for these line of Steiff dolls, however there are mentions of 100 cm dolls from Steiff catalogs.  The materials used and the seam patterns of Robert were typical of Steiff dolls of the early 1900’s. However it is still uncertain if Robert the Doll is a “genuine” Steiff Doll.

Just in case Robert has figured out how to access the WiFi at his current residence I would like to extend my deepest apologies.

If I have said anything that might have seemed disrespectful then I apologize for my rudeness.  You’re are very handsome and remarkable little sailor and Eugene was a very talented artist.

The Weird and The Odd

Serena, K. (2019, August 19). This Doll Might Be The Most Haunted Toy In History. Retrieved September 30, 2019, from https://allthatsinteresting.com/robert-the-doll.

Robert the Doll – The Story of Eugene Otto and his Enchanted Doll. (n.d.). Retrieved September 30, 2019, from https://www.hauntedrooms.co.uk/robert-doll-story-eugene-otto-enchanted-doll.